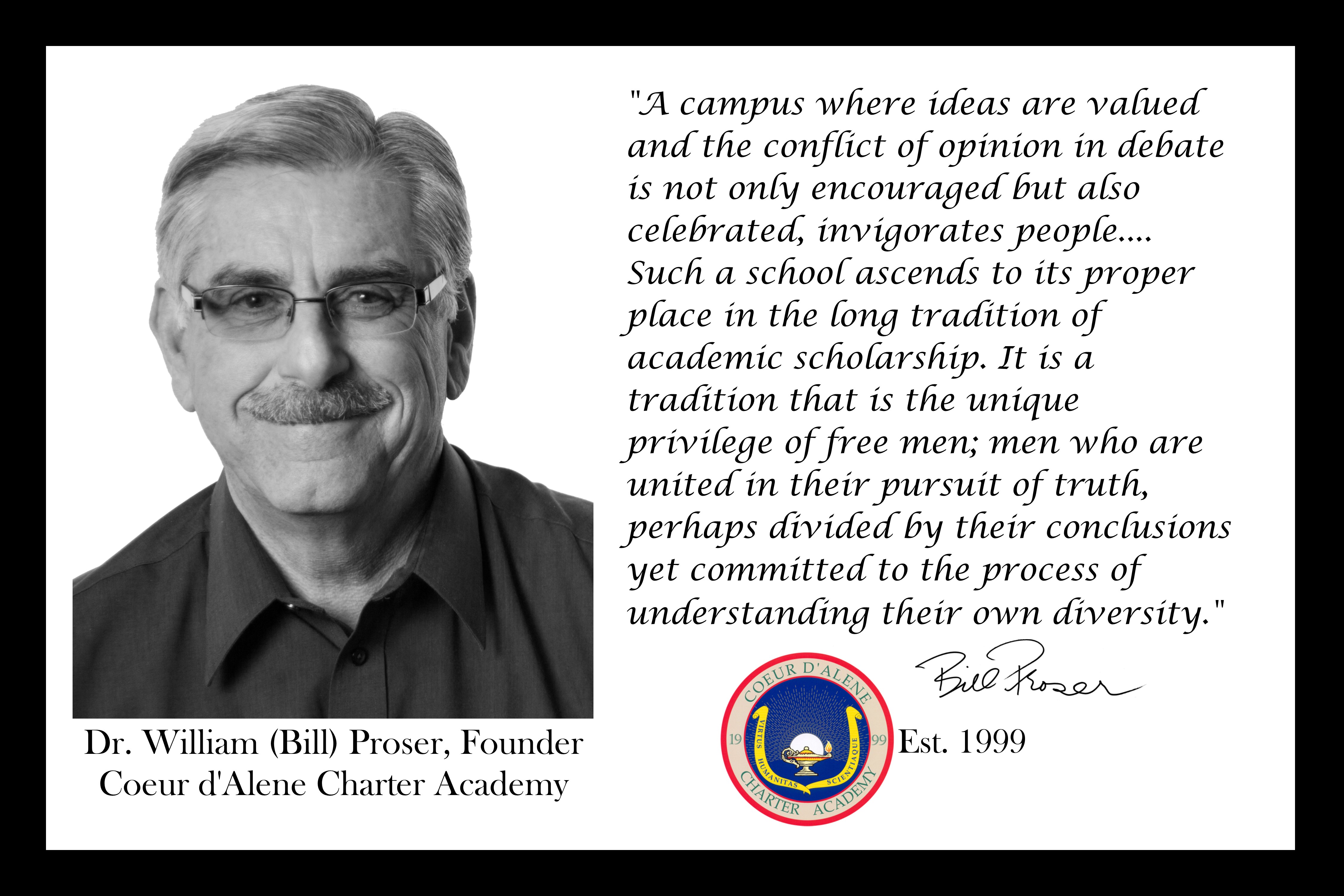 Coeur d'Alene Charter Academy is dedicated to providing a rigorous, content-rich, college preparatory education for any students who are willing to accept the challenge.

Coeur d'Alene Charter Academy exists in order to promote and implement academic excellence in our student body. Further, we seek to ensure that our graduates are knowledgeable and proficient users of language so that they may: succeed in school, participate in our democracy, find challenging and rewarding work, appreciate and contribute to our culture, and pursue their own goals and interest as independent learners throughout their lives. Included in this vision are the following broad educational goals and objectives:

The Charter Academy was founded to prepare students for success in post-high school life, regardless of their choice of occupation. Our mission statement is clear: "rigorous, content-rich college preparatory education for any students who are willing to accept the challenge." The following list represents the non-negotiable core values of the Academy, which are necessary for achieving our mission. Compromising these values will weaken the institution.

Unlike ordinary public schools, the Academy is a school students and parents choose to attend. This choice involves an acceptance of the school mission and goals and an agreement to support them.

Academics First:
The Academy is unapologetically an academic institution first. We acknowledge, however, that many top colleges expect students to participate in activities outside of the classroom. We wish for our students to be successful in areas other than academics, but require that every student who wishes to represent our school in sports, forensics, or any other endeavor first be a student in good standing. Our athletes, debaters, and performers must be scholar-athletes, scholar-debaters, and scholar-performers. We will prepare all of our students for enrollment and success in institutions of higher education.

Academic Rigor:
The Academy was founded specifically to combat the increasing problems of grade inflation and lowering standards. We flatly reject the practice of grading based on perceived effort, instead focusing on real accomplishment and demonstrated mastery of subject matter measured against a high, objective standard. Students can expect challenging coursework and a demanding workload focusing on both core knowledge and higher-order reasoning skills. These demands will require an exceptional work ethic on the part of the student. The student who perseveres will realize true self-esteem and succeed in the difficulties sure to occur in adult life.

Pedagogical Freedom:
The Academy hires teachers as experts in their fields. Teachers have control over curriculum decisions and instructional methods, as long as they are in compliance with established standards. Students and parents have a right to voice concerns, but ultimately, the teachers and administrators determine classroom practices.

Discipline and Respect:
Faculty and administration provide a safe, secure, positive environment where students can flourish. We care enough about students to communicate frankly with parents, require attendance, and hold students accountable. The Academy is proud to be recognized as a school that does not allow misbehavior and lawlessness. Academy students will respect peers and adults, and will exercise self-discipline. Students who refuse to follow basic Academy rules will receive penalties to discourage noncompliance and to place focus back on education. Although not a specific course offering, character development is a part of every class at the Academy.

We believe these to be defining elements of the Charter Academy. They separate us from the schools our students and their parents have rejected.  Failure to maintain these ideals is a failure to pursue our mission.

Statement of Philosophy from our Founder, Dr. William Proser

Recognized by the State Board of Education as an Accredited School, the Coeur d'Alene Charter Academy opened for students in grades 7 through 10 in August 1999. As stated in the Academy's charter, Grade 11 was added in 2000-2001 and grade 12 was added in 2001-2002. Highlighting the 2001-2002 school year was the celebration of the Charter Academy's first graduating class. In 2002-2003, the Academy opened its doors to students in grades 6 though 12. The Academy was founded by Bill Proser, who served as principal during the inaugural year. Dr. Proser retired from teaching high school English and economics in June 2017. His philosophy of education follows and serves as the foundation for the Academy's mission and vision.

"However different the experience of men on this planet, they are connected by a common link. They are animated by an inner drive that contends against the outside world for meaning. Above the sway of circumstance, the same shackles fetter both king and commoner to a single destiny called by the French philosophers the human condition. This mutual condition forms on our lips the great questions of life; universal questions about the existence and nature of truth, the essence of beauty and the search for justice. Education, at its best, informs us of the history of that quest for answers, examines its status and inspires us to set out once again on the road to that place where answers can be found. Elie Wiesel has said that it is the answers that divide us and the questions that unite us. Education concerns itself with those ideas that have the power to shape the very reality we experience. Ideas form the very Zeitgeist of the times. Who will argue that the ideas of Darwin or Marx, Freud or Einstein have had little effect on the twentieth century?

"The answers to the great questions do more than just color the world, they establish it. If this is true, those who teach take upon themselves the obligation of historical awareness. Each discipline of the academic world is built upon the ideas of those who asked these same old questions in a new way or replied to those questions with answers that disturbed their fellow creatures to such an extent, that a dialog was required. For the western world, that dialog is characterized by the conflict of opinion in debate. My philosophy of education centers on the attempt to stimulate in my students a respect for this conflict. The conflict is what Walter Lippmann called the "Indispensable Opposition." To respect another human being involves taking his ideas seriously enough to argue the point with him. Implied in this are most of the qualities inherent in the tradition of scholarship stretching back to the ancients. It is a tradition that values a thorough and detailed knowledge of the best that has been thought and said on a subject, a discernment of the crucial tenets of position, honesty, craftsmanship and precision with language. These abilities are the necessary tools of the would-be "scholar." Students who emerge from our classes with these skills are ready to take their place at the banquet table of ideas.

"Education, it seems to me, seeks to enlarge, enrich, and complicate our understanding of things. Perhaps, most importantly, good education mysteriously transmits a love of the subject that is the rightful inheritance of our students. It is a legacy of thought passed from one generation to the next by great teachers. It has been my good fortune to sit under such teachers. One of mine was a world geography teacher who posed a single great question for the semester. Why is Brazil so poor and Switzerland so rich? Although some of the answers our class suggested have faded, the excitement generated by the questions remains. It is my conclusion that the excitement corresponds to the difficulty of the question. Easy answers will not do, in the same way that slam dunking a basketball over the top of your little sister is not much fun. Challenge is inherently linked to achievement. A campus where ideas are valued and the conflict of opinion in debate is not only encouraged but also celebrated, invigorates people. A school that can frame the forum for this debate of ideas without the rancor or animosity that so easily shuts off the dialog has captured the idea of the British Parliament or the American Senate. Such a school ascends to its proper place in the long tradition of academic scholarship. It is a tradition that is the unique privilege of free men; men who are united in their pursuit of truth, perhaps divided by their conclusions yet committed to the process of understanding their own diversity."